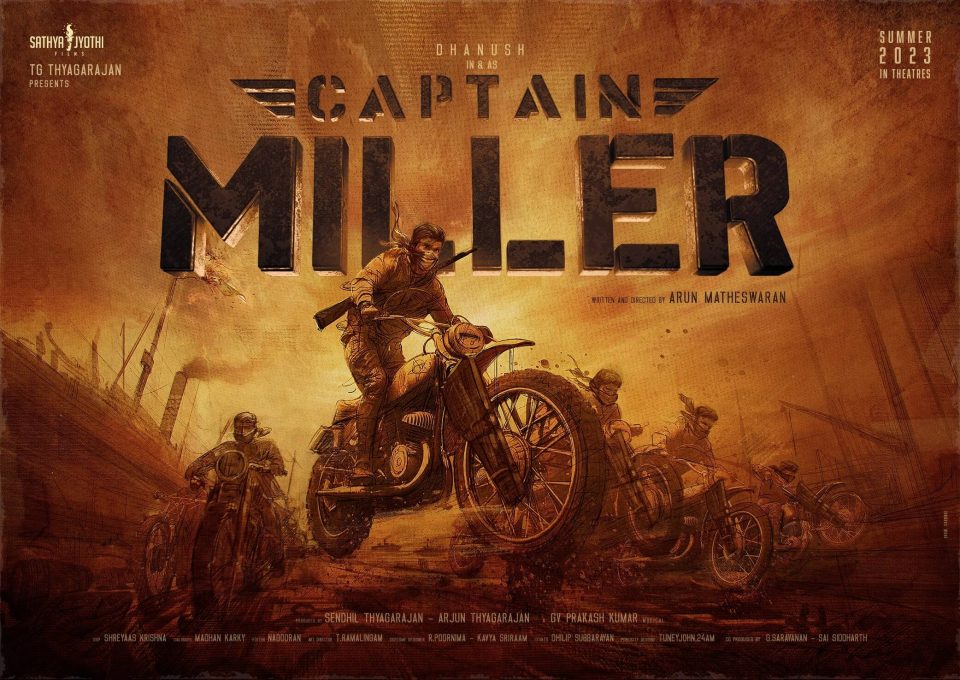 National Award winning superstar Dhanush will join hands with director Arun Matheswaran for a period film set in the 1930s-40s. Titled Captain Miller, the film is expected to be a massive set-up and can be said to be the biggest budget film of Dhanush’s career.

Talking about the same a source close to the film said, “Director Arun Matheswaran has made some critically acclaimed films while Satya Jyothi Films has created an impeccable benchmark in the Tamil film industry. And Captain Miller created a lot of buzz even before its official announcement, and Satya Jyoti Films is scrutinizing the project’s efforts to deliver an unprecedented cinematic experience for audiences. The team has gone through a year of extensive pre-production phase to ensure that the project is in its best shape. ,

About an hour ago, Dhanush shared the announcement video, in which he was seen riding a motorcycle wearing a mask and carrying a rifle on his shoulder. The video progresses as a sketch and it is gradually revealed that Dhanush’s character is named Captain Miller in the film. The significance of his name, the rest of the cast and other details are still kept secret. Here, take a look at the post:

Madhan Karki, who has worked for films like Baahubali franchise, RRR and Pushpa, is writing the dialogues for the Tamil version of the film. Other technicians include GV Prakash Kumar who will score the music, Shreyas Krishna who will handle the cinematography, Naguran who will take care of the editing, while T. Ramalingam has been selected as the art director.

Producer TG Talking about the film, Thiagarajan of Satya Jyothi Films said, “I am very excited to announce my iconic project Captain Miller, which I firmly believe is one of the most promising films to be made on a large scale from our production house. Will be

It has always been a great pleasure to work with the iconic actor Dhanush as our previous collaborations have been successful. When director Arun Matheswaran narrated the script to me and Dhanush, we were both excited and wanted to work on a bigger scale.

I have always admired director Arun’s unconventional approach and exceptional filmmaking methods to deliver extraordinary films. When he narrated the script, I was very impressed with his thought and his gripping screenplay writing.

It is great to have music director GV Prakash, whose Midas touch will add to the stature of this film. Every single actor and technician in this film has already carved a niche for excellence, and their contribution is going to take Captain Miller to greater heights. ,

Captain Miller is a multilingual release which will be simultaneously released in Tamil, Telugu and Hindi.